It was once jokingly asked: “how many psychiatrists does it take to change a light bulb?”. The answer: “One – but the light bulb has to really want to change.” Such a simple joke resonated with me recently.

My youngest daughter, Amelia, celebrated her 1st birthday just two weeks ago. In that time, she’s been learning to walk, now managing 20 steps without falling. It has been truly wondrous watching my beautiful girl grow up.

As I watched her walk from one side of the room to the other, I reflected back on some advice I’d been given when I first became a mother. I remembered feeling pressured to put my oldest daughter, Alisha, into a ‘baby walker’ because they were known to make kids ‘walk faster’. Wanting to heed the advice of others, I did as asked and Alisha was walking one week after her 1st birthday.

However, once I gave birth to my 2nd daughter, Alexia, I was much more confident in my parenting and learnt that it was okay for me to question things. Medical professionals believed that ‘baby walkers’ were quite unsafe and that it led to toe-walking. Because our oldest ended up being a toe walker, we were wary of putting Alexia in the ‘baby walker’ too much. She didn’t end up walking until 19 months.

When our youngest came along, we didn’t have a set plan. We thought we’d go with the flow, let Amelia take it at her own pace. If she wanted to walk, let her walk. If she wanted to climb all over the furniture, let her do it. She has now begun walking the same time as her elder sister did, with absolutely no help from the ‘baby walker’.

One could argue that the ‘baby walker’ has both its pros and cons: it gives the advantage of letting children walk faster, whilst giving them the disadvantage of toe-walking. But to me, there is a deeper issue beyond that.

I believe Amelia is walking because she is READY. 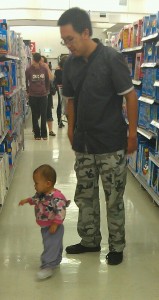 And likewise, with the children we raise, we must do the same. Don’t be in such a rush for your kids to grow up, let them take things at their own pace. The best learning that children will do will be in a positive, encouraging environment.

So when you’re reflecting back on the capabilities of your children, remember that before any change happens, they need to be READY first. Change can only occur to those who WANT to change.